Everything I write here comes with the caveat that I am remembering events of 45 years ago, with the memory of a person now in his mid-sixties.

I worked for what we called the Field Unit of WUS (UK) from 1976 – 1979. This was the campaigns team, focused on college campuses around the country. We traveled extensively, made speeches, and provided whatever moral and logistical support we could to college WUS Groups. I seem to remember that students with WUS scholarships often addressed public meetings, focusing attention on difficulties facing students and academics in developing countries as well as on human rights.

We organized campaigns, together with other NGOs and with the international department of the National Union of Students. And we lobbied government, again with allies, looking for the most promising pressure points.

One practical focus was on fundraising campaigns for more scholarships. Of course, we all knew that the money contributed by college communities would be dwarfed by official government resources. But fundraising achieved three things. First, it demonstrated to politicians that there was a constituency of support in UK college communities for a stronger official response. Secondly, fundraising was what we once called a consciousness raising tactic. Thirdly, the money was undoubtedly useful.

With hindsight, I suspect we could have done better. For example, we might have developed stronger strategic links with WUS’s refugee programs, although Richard Furtado in the team focused exclusively on the Chilean refugee program; my memory is that the linkage with the rest of the team was not always as strong as it might have been. Secondly, we might have had clearer objectives for our campaigning work. But I think we did good work, certainly with passion and energy, working in coordination with other NGOs to help demonstrate that the UK was a welcoming place for refugee students and academics, and helping to lift students’ eyes to some of the realities of the world around them.

I joined the Field Unit straight from London University (Royal Holloway), where I had been Deputy President of the Students’ Union with responsibility for international affairs and had been the WUS liaison on campus. I remain eternally grateful that Paul Hodges and Alan Philips gave me my start. After three years, I decided that if I was going to do this seriously, I had to learn much more about development; I got accepted for a Masters course but instead took a job with Oxfam in West Africa for five years, accompanied by Priscilla Annamanthodo from UKCOSA who married me. I worked for about 20 years with NGOs and then for almost the same number of years with the World Bank. None of this would have happened without WUS taking a chance on an inexperienced recent graduate. 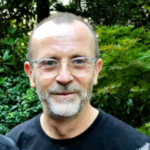 From 1976 to 1979 Nigel worked for the WUS UK Field Office, organising campaigns, lobbying government and fundraising for scholarships. After WUS he worked with Oxfam in West Africa for five years then spent 20 years with NGOS and as many with the World Bank.