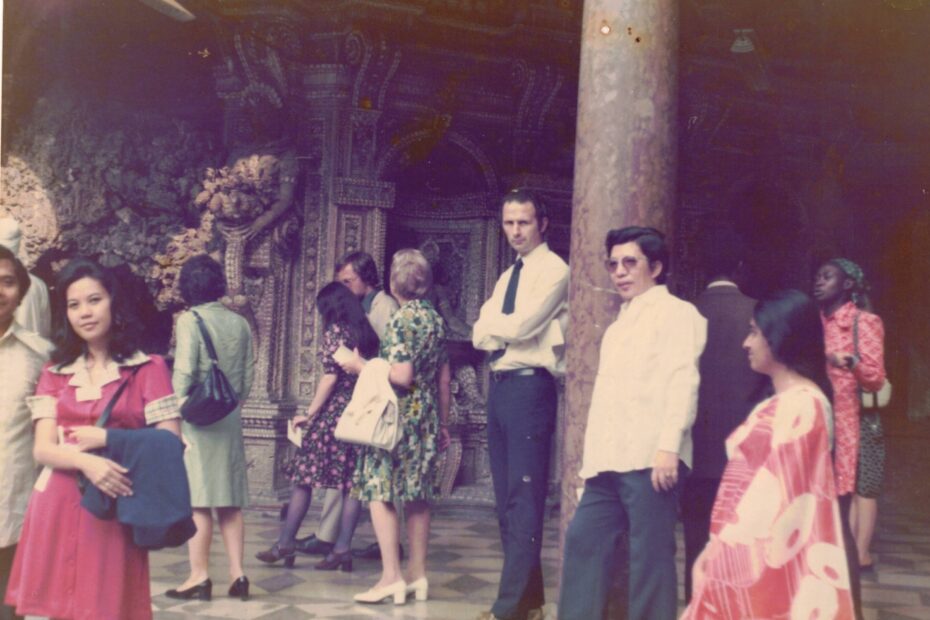 I was appointed at the General Assembly in Munich in 1974 and took up the position in early 1975. Previously I had spent ten years with Oxfam GB. My predecessor in Geneva was Sornampillai Chidambaranathan, Nathan to all his friends and colleagues, who had worked for WUS for 14 years and had the distinction of being the first person from the South to head up an INGO in Geneva. He was a highly respected person. In addition to Nathan, the secretariat consisted of an Associate Secretary, a Finance Officer and support staff. The office had recently moved from Rue Calvin, in the heart of old Geneva, to a villa in Chemin des Iris in Cointrin not far from Geneva airport. There were in excess of fifty national committees around the world.

WUS Action defined the aim of the organisation as follows:  “The organisation opposes any form of discrimination, exploitation, or injustice, especially in the sphere of education, and is committed to social action and to the opportunities for learning that such action provides.” The programmes that were adopted into the international programme of action at Munich fell into two categories: Anti-Discrimination and Social Action.

This was the period when development assistance to the developing world by governments was taking off. In the 1960s the Wilson government in the UK had been the first to establish a Ministry of Overseas Development while the UN had passed a series of resolutions stipulating that all governments should spend 0.7% of their GNP on development aid. In the late 1960s and early 70s several governments in the industrialised countries, notably the Scandinavians, were channelling increasing amounts of their assistance through the NGO community.

International WUS was quick to pick up on this development and by the time of my arrival, using its contacts initially with student organisations in southern Africa, WUSI was funding a multi-faceted anti-discrimination programme, totalling some seven million Swiss francs, in South Africa, Namibia and Zimbabwe, funded principally by the Swedish, Danish, Canadian and other governments. This programme, ranging from scholarships, distance learning, refugee assistance, legal aid and much else, excellent as it was, dominated the WUS International Office whose funding, especially difficult to raise, was largely dependent on the administrative ‘cut’ that the government funders allowed.

I am proud of the work that WUSI funded in my time, as well as the work that the national committees were carrying out on their own, notably in Canada and UK, although I had little input into these very substantial programmes myself. In particular I am proud of the work that WUSI funded in southern Africa because it promoted change and because it was feared by the governments in power at that time. Some might argue that the motivation of the programme was skewed, that the programme was important because the existence of the organisation depended on it and because we were doing work that the donor governments happened to want to support.But in the end development assistance is a process of cooperation and I salute all those involved in the WUSI programme, the recipients especially, many of whom were brave people operating at high risk to themselves. In two cases at least cases they paid with their lives. Special mention should be made of WUS Zimbabwe who ran for many years two huge scholarship programmes for university and secondary school students, and ran them voluntarily and in their free time, thus freeing up the administrative cut to support the Geneva office.

As a result of those scholarships Zimbabwe entered independence with a higher proportion of educated young people than was the case with most other African countries as they also gained their independence. WUS can take much credit for that, but it has to be added that the bright promise did not last, as the years following Zimbabwe’s independence became increasingly marked by corruption and appalling leadership. And one of those responsible for that catastrophe was a former International WUS Chairman.

In addition to the Southern Africa programme WUSI was funding a number of social action programmes run by WUS national committees in the South. All of these involved the deployment of students and staff on a variety of programmes designed to develop their local communities. Notable among these were Operation LINA , a development programme run by the students and staff of the Manila Central University in the slums of Manila, Philippines, and a particularly impressive village development programme run by WUS in Jogjakarta, providing clean piped water on the slopes of Mount Merapi, Indonesia.

Now, forty years on and reading WUS Action 1978 and the Annual Report for 1979, I am struck by the sheer range of projects that we were supporting, and by the relevance of the thinking that they displayed.

Turning to characters, because all NGOs include characters, I have to salute two, namely Georgette Robert and Charlotte Löhrig. Both of them had worked for WUSI for many years – a total of 80 years at the time of which I am writing – and were destined to continue for yet longer. Georgette managed the finances in an exemplary fashion. I say managed, because the turnover of treasurers was rapid and she therefore provided the continuity, as well as the expertise, that no-one else could provide. Charlotte (Lo to everyone) was an institution. She had retired before my arrival but she continued as a volunteer, adviser and sage. She had a particular skill in obtaining the work permits that all international staff needed to work in Geneva. I never knew her to fail. Her finest hour, I suspect, had been during the Second World War when ISS, as it then was, played a vital role in neutral Geneva surrounded by countries torn apart by war. Sadly, the details of the role that she played are now lost, partly because no-one had the good sense to interview her about it and partly also because of her own characteristic and disarming modesty.

Finally, I shall quote something I wrote 40 years ago. “On 7 August 1980 WUS will celebrate its 60th birthday. This is not something to boast about…….”   40 years later I disagree! I am writing at a time when it is crystal clear that the international cooperation of universities and the free research of scientists are of critical importance to the prosperity of humankind. World University Service, I salute you.

I moved from WUS to UNHCR in 1980, after 16 years In the NGO world. I never adapted to being a UN functionary and after two years I resigned my contract and returned with my family to the UK. Ten years followed at United World Colleges in London, where I was able to develop my interest, first kindled at Oxfam, in intercultural education. This led to some years of consultancy, during which I spent a year, back with Oxfam, as head of their refugee programmes in Goma, Eastern Congo – and nearly paid for it with my life! And finally, I spent three years in Brussels as the Coordinator of the EU’s programme to build civil society in the newly acceded countries of the Baltic States, Bulgaria and Romania.

Only days after my return to Oxford, and with retirement beckoning, the phone rang and an old friend said, “Richard, I have a job for you – Asylum Welcome is looking for a new Chair!” I should have known that the tentacles of the NGO world would reach very far indeed and are never really shaken off. And I can safely say, that the many lessons that I learnt at WUS, especially during the General Assemblies, paid off handsomely at Asylum Welcome all those years later.

Richard Taylor came to the WUS International General Secretaryship in 1975 from Oxfam UK. In Geneva he was particularly involved with the Southern Africa programs and visited projects in the South and also Australia. He went from WUS in 1981 to the UNHCR, then to the United World College in London, then briefly back to Oxfam to head their refugee programme in Goma, Eastern Congo, then to Brussels as the coordinator of the EU programme to build civil society in the Baltic states, Bulgaria and Romania. From 2004 to 2012 he was Chairperson of Asylum Welcome in Oxford.