I was part of the Africa Section of WUS UK from 1979-1991, working as a caseworker on the Ugandan, and Ethiopian and Eritrean Refugee Scholarship programmes. I also spent some time on the Women’s, Namibian, South African and Employment programmes. The Africa Section had 5 or 6 project officers, 2 secretaries (a computer was in use in the accounts department when I left in 1991!) and was ably and sensitively led by Sarah Hayward. Her early death in 2017 is a great loss to many, and many organisations she collaborated with.

Funded by the Overseas Development Ministry of the UK Government, the programme gave scholarships from 1977 to 1979, when (in April) President Idi Ami was overthrown. A month later Margaret Thatcher’s Conservative government came to power in UK, and funds for new scholarships were withdrawn, in spite of the persecution of intellectuals and disruption to education at all levels, caused by 8 years of Amin’s rule. The last student supported on this programme completed in 1984. Approximately 250 awards were made. Scholarships were awarded for courses regarded as relevant for Uganda’s development.

The scholarship programme supported displaced Ugandans, who were living in Kenya, Tanzania, Sudan or UK, to study in those countries. Some students were brought to UK to take up their places. All applicants were outside Uganda, and had sought protection as refugees. The programme supported students at all levels from post-school technical education up to PhD. Some had been studying in the Soviet bloc, and were unable to return to Uganda on completion. Women were significantly under-represented, probably due to gender bias in education in Uganda.

Caseworkers interviewed some applicants but most were paper-based and students made their own applications to courses. An awards committee made decisions. Dr Sarah Ntiro, the first woman from East or Central Africa to gain a University degree, worked for WUS UK from 1979. Based in Nairobi, she supported WUS UK staff and students particularly regarding employment for those intending to return to Uganda. Sarah died in 2018: Obituary (at 14:08)

Following the overthrow of Amin in 1979, contact was made with the Uganda High Commission, and the Education Attaché attended each annual student’s conference. Two Ministers from the Ugandan government came to UK for the first conference, in January 1980, amid great excitement and commitment to return home, to rebuild the country. Many participants brought tapes of Ugandan bands, and dancing was a hugely enjoyable part of each conference. Some met friends at the conference, not having known they had both survived exile and were both in UK. In 1980 WUS’s Editor published the first Uganda Bulletin (four or five were produced over 3 years). WUS’s link with the Ugandan government, through the Educational Attaché, achieved good communication and a high level of trust, and provided support for students seeking to return home. Regretfully, no evaluation of outcomes was carried out, or even requested by the funder. Many students returned home, and air fares were paid.

The programme began in 1977, and continued after 1991 when I left WUS. My guess is that at least 350 scholarships were awarded. Funding came from the UK Government Overseas Development programme, until it was integrated into the Foreign Office by the Conservative government after 1979, and became the Overseas Development Administration. Scholarships were made by an Awards Committee, for courses deemed to be relevant for development. Displaced Ethiopians and Eritreans, who had sought protection in Kenya, Egypt, Djibouti, Sudan or UK, were supported to study in those countries, or to take up a place in UK.

Dr Hugh Pilkington, a British philanthropist living in Kenya, who helped many refugees continue their education, was crucial in enabling WUS (UK) to locate candidates and enable them to successfully apply for courses. Hugh’s death in a road accident in 1986, when visiting students in Canada whom he was supporting, was a personal tragedy for many refugees who had been helped by him and stayed in his house, as well as a great loss to WUS (UK).

The majority of students followed courses in UK, in Further or Higher Education, up to PhD. Women were significantly under-represented, due to having less access to secondary education at home.

Students studying in UK made huge adjustments to the education system. Most had a very high level of English language. Some students faced racism, and challenges in coursework expectations, disappointing accommodation, loneliness, mental ill-health, and difficult relationships with staff and fellow students. Casework involved advising about course applications, supporting students in difficulties, visiting some if they could not come to the office. We liaised with academic staff, and had occasional three-way meetings to enable better communication, or develop a way forward. My memory is that post- graduates needed more support than students at other levels, who had more face-to-face contact with academic staff. My most satisfying visits were to a university where we supported three students all doing PhDs in the forestry department. The university valued them, and valued the relationship with WUS as the funder, and participated actively in my visits. Some PhD students were less well valued by or integrated into their departments, and had a more troubled time. The annual students’ conference, which included those who had recently completed, was always very well attended and enjoyed.

Outcomes were evaluated to some extent as part of the research (which led to ‘Displaced Labour’, and a few moved into work overseas, with NGOs or commercial organisations. After completion, a few Eritreans returned to take part in the independence struggle, but most former students of this programme remained in the UK, where some work for NGOs or local authorities, run small businesses, teach, drive taxis, or became foster carers.

Most of my working life, paid and voluntary, relates to my work at WUS, which enabled me to develop my confidence as a caseworker. After WUS I qualified as a social worker, and wrote my dissertation on the care of unaccompanied refugee children. I then worked for six years for a London Local Authority Refugee Fostering Project, recruiting, training and supporting people of Ethiopian and Eritrean origin, to care for unaccompanied young people. Following that I developed training for befrienders for young clients of the Medical Foundation for the Care of Victims of Torture (now Freedom from Torture). The Befriending Project trained adults, many retired professionals able to offer a long term commitment to a young person without family in UK. Matching befriender and young person, with input from their therapist, was a careful process, and it was heartening to hear from the team manager years later that most of my ‘matches’ had sustained, and supported the young person into adulthood.

Living in Sydney in the 2000s I did volunteer work with refugee families. My most satisfying experiences were helping a child from Burundi learn to read; taking an Iraqi family to the beach (they had never seen the sea); and coordinating a day out on the harbour for refugee families, with donated places on harbour cruisers.

I am now Chair of Trustees of ReConnect, a small UK charity working to support people with a refugee background into higher education, specifically into teaching. The Founder/director was a WUS awardholder, as are two trustees. Communicating the need for funding for this work is an ongoing task!

On a personal level, several Ugandans who I met when working at WUS supported me to find my fathers’ grave there, which was life-changing. 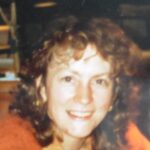 Sarah Buxton was a member of the WUS UK Africa Section from 1979 to 1991. Here she developed skills as a caseworker, and as a qualified social worker subsequently worked in refugee fostering in London, and at the Befriending Project of the Medical Foundation for the Care of Victims of Torture. She was employed and also did volunteer work in Sydney in the 2000s, with organisations providing services to newly arrived refugees and asylum seekers. She currently chairs the Trustees of the charity ReConnect.