How a targeted WUS intervention changed my life

It was about 30 years ago, before entering the University in Sri Lanka, when I was first introduced to the three letters that in several years’ time were going to change my life forever, taking me through to a different continent and allowing me to fulfill my dream of living a life without becoming an instrument of or being destroyed by the most repressive times I was going to witness in my University life during 1981-84 in Sri Lanka.

Obviously I had no clue what WUS meant in 1980 when a friend from the University of Peradeniya – the most beautiful University located in the hills of Sri Lanka –  told me about a ‘WUS canteen’ at their University, where they would have a cup of tea while watching beautiful nature, listening to the birds, talking about arts, science and also arguing about politics of the country while studying Engineering. Occasionally they talked about the content of the lectures they received from an amazing group of highly qualified Professors, too. I had no idea about the extent to which WUS helped building facilities varying from bookshops to canteens in Sri Lanka’s public University system. I also had no idea that I would become an honorary Professor of this beautiful University 25 years later thanks to WUS.

It was about a year later at the University of Moratuwa closer to my parental home, where I was enrolled as a student, I discovered WUS as a useful progressive organization from the perspective of the student Union, where I was the Chair of External Relations. In 1982, I became the Secretary of WUS at the University of Moratuwa and was mentored by the President of WUS at Moratuwa – Prof Lakdas Fernando. He very well understood my views and my relationship to the Student Union and kept an eye on me to ensure that I fitted in within the non-governmental unbiased yet progressive world of WUS. In the same year I was introduced to then WUS leaders in Sri Lanka, the late Prof V. K. Samaranayake (affectionately known to WUS International as Sam), Prof Hema Goonatilake, Prof Tilekaratne and late Mr Gajaba Gunawardena. Gajaba came over to WUS from the student movement in Sri Lanka and quickly we formed a long-lasting friendship. In the subsequent years I got to know Prof Laksiri Fernando, who became a friend and a mentor who shared with me many stories about his interactions with student politics as well as his approach to the rights of minorities. Laksiri went on to become WUS Associate Secretary for Asia and the Pacific and both Sam and Hema became members of WUS International executive committee at different times.

I was a part of highly innovative WUS culture both at Moratuwa University and in Sri Lanka and later in Germany. Brutal crackdown on students by the government pushed WUS away from its traditional non-confrontational balance. In July 1983 (widely known as black July), Sri Lanka witnessed the bloodiest racial riots in its history. I was called in by the Vice Chancellor of Moratuwa University to assist him in his impressive efforts to save minority students stuck near the University. The minority students were housed inside the University; we spent the nights watching for potential goons attempting to enter the University premises to attack those students. After witnessing the riots and subsequent politics of the then regime, it was clear to me that Sri Lanka was heading for dark days.

In 1984, the government banned all student unions in the country and I became the Vice President of WUS Sri Lanka, which was the highest position a student could have. Winning a public speaking competition organized by WUS Sri Lanka, I was selected to attend the WUS International conference held in Nantes, France in the same year. It was my first trip overseas and it also changed my life significantly. Meeting Dr Kambiz Ghawami of WUS Germany was a highlight of this trip. Kambiz listened carefully to my description of what was happening in SL. The day before my departure to France, a leader from the banned student movement in Sri Lanka handed me a document describing some details of suppression of student leaders sponsored by the state. I agreed to pass it to organisations and individuals I was going to meet at the WUS conference. For the first time in my life, I met student leaders from Latin America and a charismatic student leader from South Africa. I was convinced that my approach to care about the country more than my own studies was the only honest approach I could have taken given what I saw in their lives. I went back to Sri Lanka with lots of contacts of International student organizations, which I had transferred to the then very isolated student movement in Sri Lanka. The repressive government was carefully watching me. My neighbors told me how the secret police came to see them to seek information about me. They even approached Sam and the then Vice Chancellor of Moratuwa University to seek information about me. Both of them warned me and wanted me to be careful.

Wearing two hats of student leadership, I was focusing on my responsibilities at the University more than studying Electronic Engineering and the tricky theories of telecommunications. I was set to graduate as an engineer and be employed as one in Sri Lanka. Little did I know at the time that I would be unhappy with the consequence of my sacrifice.  Soon after graduation, I realised that I would only be happy to work as an educator, which required me to gain additional educational qualifications.

In 1985, WUS came up with a life changing intervention for me, which most likely saved my life as the events that unfolded soon after forced many people including the key WUS leaders who did not toe the line to leave the country. During this time WUS Germany advertised a scholarship scheme funded by the state of Hesse for students with a strong engagement profile from third world countries. They were looking for evidence of engagement with the wider society. I applied and received an offer to study in Germany. I went on to study again – away from Sri Lanka and its repressive regime under the mentorship of WUS Germany. Kambiz and other WUS friends in Darmstadt mentored me. Veronika Nitschko and the late Jurgen Schmidt of the WUS local committee in Germany were my German “parents”. I used this opportunity to engage more with WUS in Germany and also with WUS International. With two charismatic students from Jamaica and Australia, I have successfully campaigned to establish a WUS International student network at the 1991 WUS International conference held in New Delhi, India and became its Co-coordinator. We held our student meetings in the evenings and there was lots of energy among the WUS students who attended. From 1991-94, I co-edited a WUS Student Network newsletter sponsored by WUS Germany and circulated by WUS International.

After my master’s studies on a WUS Germany scholarship, I continued my studies as a PhD student in Germany supported by research grants from my thesis supervisor Prof Manfred Glesner and the Heinrich-Böll-Stiftung, Germany. At the time, it was clear to me that I would like to be a Professor. The repressive government was defeated by that time and I have had few offers to go back to Sri Lanka. But I decided to take an offer to teach and move to another continent – Australia, where many of my friends had already migrated. Since then, I have had several opportunities to work in Sri Lanka and other developing countries, for example, as honorary Professors of Universities in Peradeniya and Colombo as well as giving the 2016 memorial oration of Prof VK Samaranayake (Sam) in Sri Lanka. I also help the National Science Foundation of Sri Lanka to coordinate their effort to reconnect with many Sri Lankan expat professionals living in Australia. My greatest achievement in Australia, from 1996-2020, is that I have trained 40 PhD students coming from developing countries, while supporting them to receive scholarships from Australian sources, and 6 of them are currently working as academics in Sri Lanka. I am also an honorary Professor of ITB in Indonesia and several Universities in India and China. I have spent my long service leave working with the Ministry of Higher Education in Sri Lanka and also worked with UNDP on Sri Lanka. At least once a year, I travelled to Sri Lanka to work with a University or to fulfill various academic commitments I have agreed to fulfill. 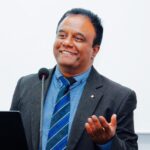 In 1980, in 1982 Saman became Secretary of WUS at the University of Moratuwa and in 1984 Vice President of WUS Sri Lanka. After attending the Nantes Assembly, he moved to Germany for further study under the mentorship of WUS Germany. His WUS involvement included establishing a WUS International student network in 1991. He is currently a Professor of Civil Engineering at the University of Melbourne, Australia.